Joyce Fish Sherwood joined the WAVES in 1942.  Like Helen Edgar Gilbert, she was part of the first class of WAVES, who skipped the Hunter College boot camp experience. After enlistment, Joyce was sent to Indiana University in Bloomington for orientation and storekeeper training.

Joyce was stuck in training and Christmas was approaching. So since she couldn’t get home to her family, her family brought Christmas to her.

The three of them came down and stayed in Bloomington and came onto what we called the ship (laughs) to visit and they were allowed to do that.  I really don’t have much of a recollection of gift giving or anything like that.   Because we had our uniforms by then. We had sent all out civilian clothes home.  So there wasn’t much they could give me except stationary (laughs) or things like shampoo and stuff that you would always need. 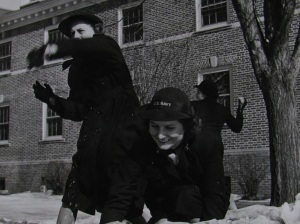 They were proud. They were proud.  I think that had something to do with this patriotism blast we were on, too.  All the civilians were, “Oh!  You’re in the military!”  You know, they were glad to see us and they were appreciative of what we were trying to do.