Depending upon the weather, WAVES could do their exercises either indoors or out. These WAVES are at the Naval Training School for Advanced Machinist’s Mates in Norman, Oklahoma. They’re working on a field outdoors (note the jumpsuits they’re wearing for their exercise). 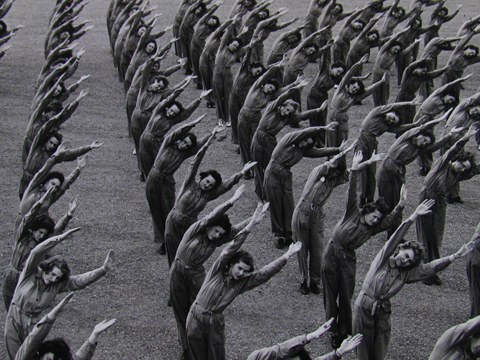 But a cold winter day could drive the WAVES indoors. Jeanette Shaffer Alpaugh remembers being at training camp in Cedar Falls working one day inside in the gymnasium.

We were four abreast, one bunch of four after the other. The officer is charge was, somebody came to the door and called her over. She didn’t say “halt.” So we were marching ahead and this person kept talking to her. Now, we didn’t really know this. Anyway, I was in the second group of four,  We come to the end of the gymnasium and she hadn’t said, “halt” or “squad left” or right or anything.  And so there were stall bars at the end of the gymnasium.  I don’t know how this first group of four — I don’t think I would have thought of it, but they started climbing the stall bars (climbing bars on the walls of old gyms).  So here’s four people going up stall bars. We’re the second group of four, we started going up stall bars. She turned around and there were about four groups  (laughs) up on stall bars. I think that — you know, then she says. “Halt!”  It was really funny.

The photograph comes from the National Archives.