Jean Clark’s husband, Lou, had enlisted in the National Guard before the war. By December of 1941, he was in training at Fort Lewis outside of Tacoma, Washington. They got word they were shipping out in February, so Jean decided to head up to the base and visit.

At night they called a muster and they lined up with all their gear in line and we just watched them as they marched by. They came close enough that they could give us a hug and say goodbye but that was it. I stood there thinking, “Boy, I feel like I’m in a movie just (laughs)” 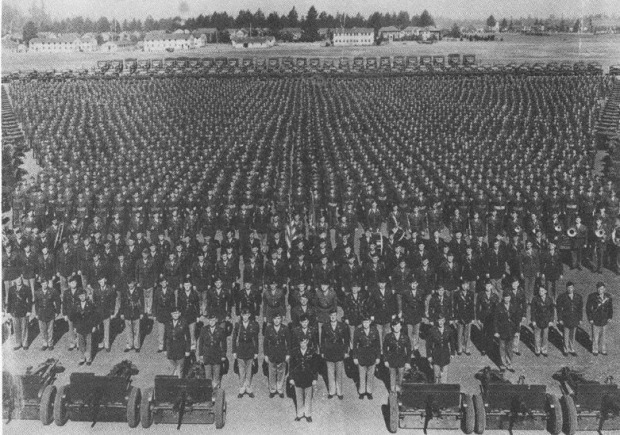 But there was a problem with this cinematic scene. The base was shut down and Jean was stuck inside with another woman who had also come to see her husband off.

We decided, “We might as well stay here. There’s no bus at this time of night.”  So, went into the place. There wasn’t a scrap of anything.  We found an old blanket. We said we didn’t want to sleep on the floor because it looked a little bit chewed (laughs).  My friend said, “My husband says they have rats in this place.”  So we got up on the meat block and spread out and put the blanket over us and went to sleep until morning when we heard this guard going — he was supposedly guarding. I don’t know what he was guarding, but everybody was gone (laughs).  But he was on guard duty.

He’d go one side of the building. Click. Turn in a military manner. Down the other side of the building. Click.  Down the other side. We watched him. We thought, “Wheres’ he going to be?” So while he was on the back side, we went out the door.  (laughs) And headed to the gate. She said, “Maybe they’ll think we’re civilian employees.”  And I think they did. We just walked out and got a bus.