Jean Clark was in the first class of recruits to be trained at Hunter College in the Bronx. The women were bunked in what were formerly civilian apartments surrounding the campus. There were 12 in her room, all sharing a single shower.

We had to take turns taking showers. One day it was my turn to take my shower and they called — while I was in the shower, hey called from the downstairs “Inspection!”  We had been there a little while and we were supposed to have the room shipshape. Everything neat and clean and dusted and at attention in full dress.  Here I am in the nude in the shower and here it is five floors down. My bunkmates all start handing me clothes (laughs). I thought, “I’ll make it” and I did, except I didn’t’ get my shoes tied.  And I was standing there at attention with my shoelaces dangling.  The WAVE officer didn’t notice (laughs). 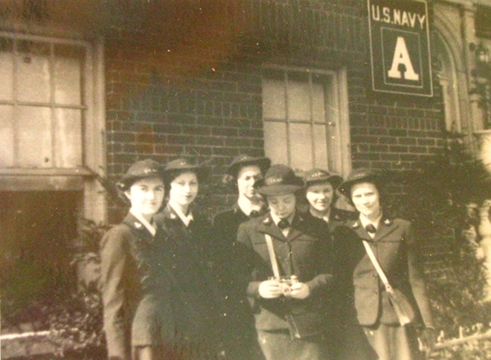 This photograph shows the WAVES-in-training standing outside of the Bronx apartment building where they were stationed. It comes from the collection of Jean Clark.