One of the rumors swirling about the military women was the various qualifications they’d need in order to join the different branches. Since the WAVES’ name evoked water, and the WAVES were part of the Navy, one rumor about the WAVES was that a woman had to know how to swim in order to join. Some members of the Women’s Army Corps even now say they didn’t join the WAVES in World War II because they couldn’t swim! 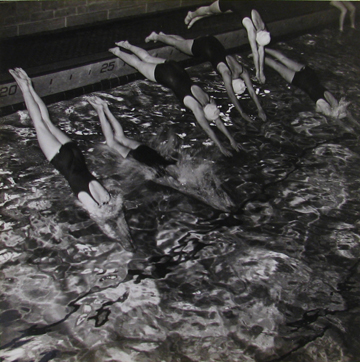 The rumor was false; a woman didn’t have to be a swimmer to join the WAVES.  But swimming was one of the activities women could do to keep in shape.

These WAVES are swimming in the pool at Yeoman Training School at the University of Northern Iowa in Cedar Falls, circa March 1943. The photograph can be found in the National Archives.