We were not prepared for boot camp. We had to jump through the tires, you know. Then the next thing we had to do was we had to scale a wall.  We couldn’t do it.  I said to the girl in back of me, “Quinn, push, because I’ll never get over that wall.” 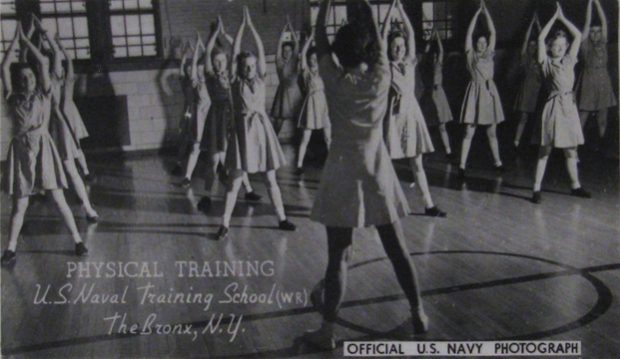 There was a big rope and it had a knot on it.  And there was a pit with mud here.  We had to back up and jump and my friend Quinn who was with me, I said, “Quinn, I’m never going to make that pit.”  And she said, “Neither am I.”  So we sneaked over to another line. We never had to go over it.  We didn’t get caught.  I said, “If we’re caught, we’re out. They’ll get rid of us.”

The photo comes from a Navy post card set produced about the Hunter College boot camp. It’s from the Betty H. Carter Women Veterans Historical Project at the University of North Carolina Greensboro.