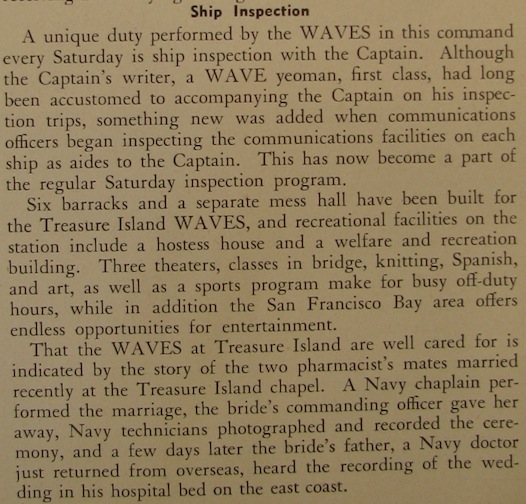 Every Saturday at the Treasure Island base, World War II-era WAVES were part of the “ship” inspection with the Captain (bases are known as ships in Navy parlance).  Above is a description of a typical Saturday inspection, including a charming story at the end, as published in the WAVES Newsletter.

Jean Byrd began working after the war, returning to the job she had before entering into service. When her brother returned home from his stint in the Navy, he brought along a friend. Bill Stewart.

You just don’t up and get familiar with a person.  You have to learn something about them. If they’re nice, or you can be congenial, or get along with them.  So I’m minding my business, going to work.  I hate to say it, but they served me a drink that I just thought was light soda or something or other, because I was going to work.  I wasn’t going to be home and talk with them.  I was going to work. And they said, “You can’t go to work because we put something in that, and you just have to take the day off and go on.”  Well, I didn’t like that.  Because every day counted, right? Yeah, that’s what they did to me. So I didn’t go to work that day.  I got to learn something more about him.

After he had been over a couple of times, Bill suggested that he and Jean might want to think about getting married near his birthday in June. It was May.

I said to myself, “This is moving in a hurry.”  Well I had a sister who was supposed to get married in September.  As time when on, I don’t even know how long it was, but come to find out he appeared to be nice and I didn’t know anything that was against him (laughs).  I said, “Well, we’ll talk to Lina and Johnny.”  I said, “It would be rough on my mother to have a wedding for them and have a wedding for us at another time too.  What if we get together and have a double wedding?”  And so it ended up, that we had a double wedding and got married.

This photograph comes from the collection of Jean Byrd Stewart.

Romance often moved quickly during World War II. Phyllis Jensen Ankeney grew up in the same neighborhood as her husband-to-be. She remembered admiring his Navy uniform after he enlisted in the service, but romance didn’t blossom until after she had joined the WAVES and they were home on leave together.

He got pretty upset when he found out I had gone in the service (laughs). He didn’t think a woman shouldn’t be there either at that point. But anyway, we came on home on leave together, not knowing it. He came from the South Pacific and I came from Florida.  We happened to come home at the same time. We went together for the few days we were  at home. Other than that, I had not dated him.  And he said that we’d get married — that I’d get a ring for my birthday in January. This was in September.  We were married the seventh of October.

We talked every night. And he wanted to get married. I said, “I don’t have any leave coming, If we’re going to get married you’re going to have to come here.” So he came right on down there. But we did have a church wedding in Pensacola.  A Lutheran church.  No family, no one around.  Just the ones from the base that came in. The minister had a youth class there on Sunday night and he asked if I would invite them to be at the wedding, so I did.

They ended up moving back to their home town after World War II and Phyllis got pregnant almost immediately after she was discharged. Her husband did get called up into the Navy again, during the Korean War.

The photograph comes from the collection of Phyllis Ankeney.

While in school to become a teacher Jean Clark met her husband, Louis.

He was in one of my psych classes and he was a year ahead of me.  He had grown up in Corvallis (Oregon) on the farm there, and he decided that he needed to earn some money, some extra money for school, so he joined the National Guard. He was the youngest of six in his family and he had four brothers who were in the National Guard. He wanted to be in and as soon as he was 16 he joined the National Guard.  He was still in in college, at Monmouth.  In 1940, the United States decided to mobilize the Guard because of the trouble in Europe. So he spent a year in training. In the meantime we had developed a sort of a relationship.  When I was teaching at Brownsville (Oregon), we became engaged in 1940. So I was waiting for him to come back from his training.

This photograph comes from the collection of Jean Clark.

Franny Prindle met her husband-to-be Seth Taft while she was still in college. Seth was the grandson of the former U.S. President William Harding Taft.  They were both officers in the Navy.

Initially, WAVES weren’t allowed to be married. But the Navy discovered that they were losing out on some qualified women (or were forcing them to resign upon marriage). So first women were only allowed to marry outside of the Navy. Then that policy too changed, and WAVES were allowed to marry Navy men. 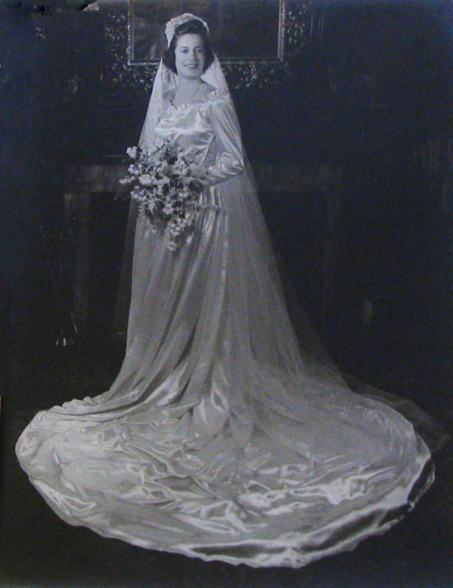 This photograph is of Franny on her wedding day: June 19, 1943. She and Seth were both Ensigns at the time – he wore his dress whites to the ceremony. She had a half-dozen bridesmaids and changed into her Navy uniform before departing on her honeymoon.

Navy WAVES were active, regular military. That meant they were expected to wear their uniforms during all public functions. Including weddings. 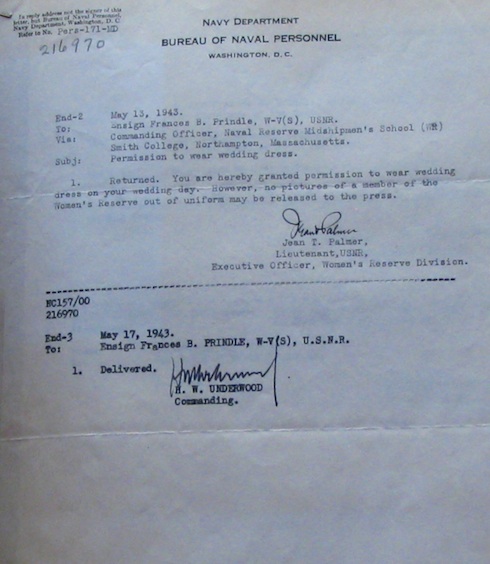 Franny Prindle, like other WAVES of the era, had to get a special dispensation from the Executive Officer of the Naval Reserve to wear something other than her uniform on her wedding day.  But note the special conditions: no photographs of Prindle outside of her uniform could be released to the press.