The Yeoman (F) marked a new era for the Navy. Women were working alongside men, albeit because of a loophole in the Naval Reserve Act of 1916, which never said that Naval service was limited to men. Most of the women served in the Washington, DC, area, but they were ultimately stationed in bases across the country, as well as overseas in Puerto Rico, Guam, Hawaii and the Panama Canal Zone. Five women were sent to France with Naval Hospital Units.

This photograph, circa 1918, shows Yeomen (F) being inspected by Rear Admiral Victor Blue (left center), Chief of the Bureau of Navigation, on the Washington Monument grounds. It comes from the Naval History and Heritage Command.

The Yeomenettes greatly expanded the opportunities for women in the Navy.  One job the women learned was telegraphy, using a telegraph to send messages via wires over long distances using Morse Code. The Morse telegraph was invented in the United States in 1936, and by 1861, telegraph cables stretched not only across the United States but also under the Atlantic Ocean to Europe.

In this photograph, new enlistees receive training in telegraphy from a Chief Petty Officer, at the Naval Training Center, Great Lakes, Illinois, in 1917. Some of these women are in uniform while others are still wearing civilian attire.

It comes courtesy of the Naval History Heritage and Command.

When looking at the history of the WAVES, and Navy women’s firsts during Women’s History Month, one can’t ignore the contributions of the World War I Yeomen (F). The Yeomenettes (as they were known) were the first women to serve in the Navy in a position other than nursing. They did a wide variety of work in the Navy, from clerical jobs to translations to fingerprinting and ship camouflage design.They were allowed in because of a loophole in the Naval Act, which never indicated that Naval service was limited to men.

Loretta Perfectus Walsh was the very first Yeomanette. She enlisted on March 17, 1917 at age 18. She became the first woman Navy Petty Officer on March 21st of the same year.

About 13,000 women were WWI Yeomanettes.

This photograph comes from the Library of Congress.

When World War I broke out in Europe in 1914, two Navy Nurses requested discharges and joined the Red Cross. There they served in the war zone, helping treat men who were injured in battles.

The women would spend a year on the front lines. In 1915, both returned to the United States and reenlisted in the Navy. Their experience was important, because it would help shape the role of women when the U.S. entered the “Great War” two years later, in 1917. 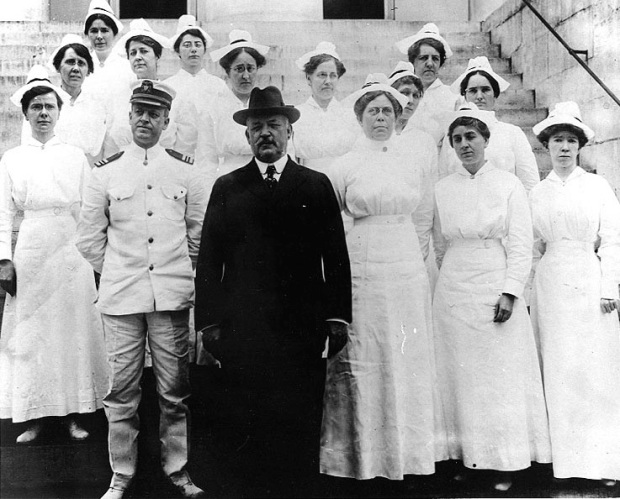 This photograph at the U.S. Naval Hospital in Norfolk, circa 1914, comes from the collection of the Naval History and Heritage Command.