The Yeoman (F) served through the end of World War I and all were released for active duty by July of 1919. Many of the women were later appointed to Civil Service positions as civilians and continued their work with the Navy.

These women served in the 12th Naval District offices in San Francisco – it comes from the Naval publication The Compass, the district newsletter. The headline attests to the quality of the work of the Yeomanettes.

These Yeomanettes participated in the Victory Loan drive in New York City on May 8, 1919. They are surrounding a sailor at an event sponsored by the League of Catholic Women at the Cardinal Farley Club, New York City.

The Yeoman (F) at the front has a shoulder patch with an anchor and the initials “Y” and “B”.

The Yeoman (F) not only worked alongside men in the Navy – the Navy found that they were also useful to help in Naval recruitment. 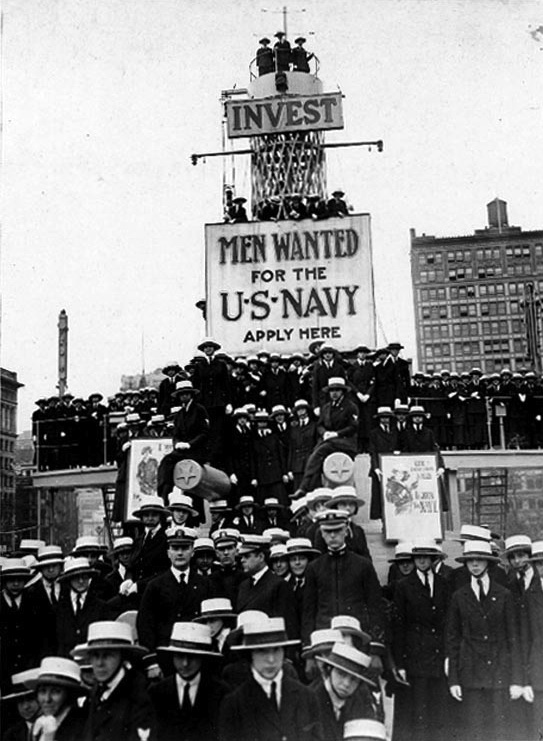 These women participated in the Victory Loan drive in New York City on May 8, 1919. They were instrumental in putting the drive “over the top” – i.e. earning more than the targeted goal. The structure the women are standing upon (and around) was built to look like a battleship’s superstructure. It also has two Howard Chandler Christy recruiting posters: “I Want You for the Navy” and “Gee!! I Wish I Were a Man”.

The Yeoman (F) marked a new era for the Navy. Women were working alongside men, albeit because of a loophole in the Naval Reserve Act of 1916, which never said that Naval service was limited to men. Most of the women served in the Washington, DC, area, but they were ultimately stationed in bases across the country, as well as overseas in Puerto Rico, Guam, Hawaii and the Panama Canal Zone. Five women were sent to France with Naval Hospital Units.

This photograph, circa 1918, shows Yeomen (F) being inspected by Rear Admiral Victor Blue (left center), Chief of the Bureau of Navigation, on the Washington Monument grounds. It comes from the Naval History and Heritage Command.