Eileen was one of the women who took advantage of the GI Bill, which had passed in 1944 before her first tour of service ended. It had always been her dream to attend college. She took a few night courses at George Washington University, while in Washington D.C., but as soon as she signed the papers to leave the WAVES, she went to Kent State University in Ohio to study Business Administrative Economics.

Her time with the WAVES was not up though. Eileen re-enlisted in 1951 during the Korean War and volunteered for a two-year term. She was again stationed in Washington D.C. and doing Yeoman’s work, except this time as a chief.

“A chief, you know, has privileges in enlisted cafeterias and stuff and mess halls. And so you go to the head of the line, and that always bothered me. But one time I was just kind of staying back, you know. And one of the other chiefs said, “You get up here” (laughs). So I did.”

One of the highlights of her service was doing research for Captain Walter Karig, who was writing a book about the Korean War.  Her name is listed in the book as a contributor.

She had planned to stay on with the WAVES permanently, but in May of 1952 she met her husband, Walter, they married in August, and she left the WAVES for good in 1953.  When his service obligations ended, they moved to the West Coast, where Walter had family.  Eileen now lives in Grants Pass, Oregon.

Karig’s book, where Chief Yeoman Ethel Eileen Horner is listed as a part of his staff.

Eileen was positioned in the Bureau of Ships as a “flying squadron,” or a temporary, so she was continually being moved from project to project.  World War II ended in August 1945 and though the WAVES were originally supposed to be kept for duration plus six months, Eileen and others stayed on much longer.

In July 1946, Eileen was assigned to work on Operation Crossroads.  This was a military mission to test nuclear weapons in the Marshall Islands.  At that time very little was known about how nuclear weapons were created and Eileen remembers hearing terms such as “nuclear engineer” for the first time that summer.

She looks back at this project as one of the most exciting missions of her service.  (To learn more about Operation Crossroads and the Bikini Atoll blast click here.   To see a gallery of photos from Operation Crossroads click here.) She worked specifically with the USS Wharton, taking care of the paperwork and processing travel orders for the men assigned to this ship that would sail for Bikini Island.  She was even able to wave goodbye to the ship when it left. The damaging effects of this nuclear testing were a difficult surprise for Eileen and she alludes to feeling some responsibility for the “mess” the men were sent into.

“I don’t know if any of them realized the power of the atom bomb. To the extent of what it became. Maybe the scientists themselves had an inkling, but I don’t know think they really knew.”

After training at Yeoman’s school in Cedar Falls, Eileen was stationed in Washington D.C.

The photo above was taken at Iowa State Teacher’s College in Cedar Falls where Eileen (and Thorngate ) trained.

“I always say I joined the Navy to see the sea and I saw D.C.”

She was in the city when President Roosevelt died in 1943 and remembers seeing, through tears, the riderless horse follow the procession down Pennsylvania Avenue (pictured below).

“I really did at that point realize that I was, you know – small  minute part, but a part of history.”

“In today’s Navy … I certainly recommend women to do it because they’ve got all the opportunities in the world.” – Eileen Blakely

Eileen Blakely, is pictured below (bottom row, third from left) with Margaret Thorngate (bottom row, fifth from left) in school at Cedar Falls, then the Iowa State Teachers College.  They were not acquainted at the time, but are now both Oregon residents, only three hours apart, and members of the statewide WAVES group.

“We met some people from all over. I had three people, WAVES roommates, that we stayed together or kept in touch ‘til they died.” – Margaret Thorngate

Eileen had a moment of doubt when she was in boot camp.  She remembers waking up at Hunter College in New York to a  particularly rainy and overcast morning.  The WAVES were marching to breakfast wearing “havelocks.” (A havelock is a covering, pictured below, that hangs down from a military hat for protection in rain or sun. Eileen calls it, “rain gear.”)  She questioned her decision to enlist for a moment that morning.

“Clump clump clump.  We probably looked like we were nuns from the nunnery or something.  You know, dark clothes, marching along.  And I looked over at the – there was the El train you know, high. You could see the lights of it.  And I thought to myself, “What on earth did I sign up for? What did I think I was doing? Marching along at this ungodly hour to get breakfast? … And that was the one time when I wondered why I was where I was.”

First “chow” is served by the Red Cross at the Hunter College campus, as the facility is placed in service as the basic training center for Navy and Coast Guard women, 8 February 1943. (US Navy photograph)

We’re continuing our series remembering the life of Eileen Horner Blakely, who died December 30th at the age of 96.

Eileen remembers hearing about Pearl Harbor while she was at a church meeting.  It was shortly after this infamous attack that her uncles and brother joined the Navy.

“We knew it was serious, but I don’t think any of us realized how serious, because we were teenagers, you know. So… see, I graduated in June of 1941. That first year, a lot of my classmates were killed… in that first onslaught of the war.”

The fact that the Navy WAVES uniforms were fashionable was a big hit with the women who enlisted.

“Well, look at khaki. I mean, who looks good in khaki? Or even, you know, that drab green the Marines have. But there was something more exciting about the Navy, and sea, and ships and so forth.”  – Eileen Blakely

“I would look good in blue, and after all, my uniform was a dress designer: Mainbocher. … My eyes are blue so they matched.  Blue is my color.  ” – Eileen Blakely

She was born in Orville, OH., but her family moved to Canton, OH., when she was a baby which is where she grew up. Looking back, she knows her family struggled during the Depression, but she doesn’t remember feeling hungry or deprived.  Her father worked for the Pennsylvania Railroad Company and her mother worked in a bakery, but the family still lost their home in 1932. They were able to move into a large house as caretakers, however, and some of Eileen’s fondest memories took place in this house.

“I remember that we had two peach trees. One was a white peach and one was a yellow peach. Jack [Eileen’s younger brother]and I claimed a tree that was ours. We’d built a old tar paper shack. It was kind of off the garage and had a club – a secret club. Everybody knew where it was, but it was one of those kid things.”

“We never felt poor because everybody was in the same boat in those days. People would help each other out. “

We got word that Ethel Eileen Horner Blakely died December 30th at the age on 96. Eileen planned her own birthday party in October, and was an amazing woman. This week in her honor we’re sharing some of our posts about Eileen’s life.

She joined the WAVES in 1944 at 20 years of age. She was persuaded to join along with a church friend whose husband was in the army. Eileen went to Hunter College in the Bronx, New York,  for boot camp and next to Cedar Falls, Iowa, for Yeoman’s school (a “Yeoman” in the Navy does secretarial work). She was in the same school at the same time as Margaret Thorngate, and they are sitting near each other in their unit portrait.

Eileen, originally from Ohio,  saw her life as quiet and dull. She wanted to make a difference and  joining the Navy seemed the patriotic thing to do. With a desire to get out of her comfort zone, she signed up for the WAVES – a place where she was needed.

When I read today about the USS Gabrielle Giffords being commissioned, I wondered how many Navy ships actually had been named after women. I know that naming civilian ships after women is common, but Navy vessels seem to have a different nomenclature (I think of all the World War II-era ships named after states, for instance).

So the history buff in me began looking at Navy history.

While there had been a handful of female-named military ships prior to the Civil War, it was the Harriet Lane to become the first armed ship in the U.S. Navy named after a woman. The steamer was named after President James Buchanan’s niece, and was first launched in 1857. She was captured by Confederate forces in 1863 in Texas.

The Navy had five transport ships during World War II, all named after women: the USS Dorothea L. Dix, the USS Elizabeth C. Stanton, the USS Florence Nightengale, the USS Lyon (named for Mary Lyon) and the USS Susan B. Anthony. There were also several harbor tugs active during the war named after Native American women: the USS Pocahontas, the USS Sacagawea, and the USS Watseka.

In 1996, the Navy paid tribute to another of its female enlistees. The USS Hopper is named for former WAVE and computer genius Grace Murray Hopper, who remained in the Navy after World War II and helped lead it into the digital age.

Another ordered ship will pay tribute to astronaut Sally Ride.

The Giffords isn’t the only current ship named after a politician. The USS Roosevelt, a destroyed launched in 1999, is named after both former President Franklin Roosevelt and former First Lady Eleanor Roosevelt. 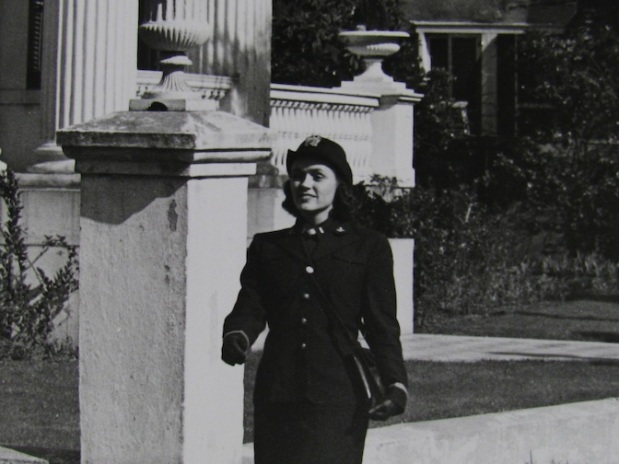 WAVE Emma Denton Shelton, who left a job as a secretary at the Nashville Tennessean to become a WAVE. She became a communications officer in the Sixth Naval District, Charleston, SC. Here she’s walking home from work.

The photograph comes from the National Archives.