The Guardian UK published a piece Friday from author Julia Lovell where she talks about “common knowledge” in publishing that women can’t write about war. In it, she argues (quiet compellingly, I might add) that the view of military history as only being about explosions and battlefields is in fact an old fashioned model of military history. A more contemporary view, she says, is to think about military history as a multidisciplinary field, which embeds “political, social, cultural and personnel contexts.” In other words, war is about more than just battles.

Yet “we” don’t want to hear that. I’ve been told that the everyday stories of the WAVES I’ve interviewed are just anecdotes, and not really “important” history.  Or (horrors!) the stories are told in a way which is too conversational and attempts to reach to a larger audience, so so clearly can’t be “proper” history. The criticism seems to echo what the women have told me frustrates them about the World War II histories they’ve seen: it’s evident their story isn’t really worth telling (at least to the powers that be). 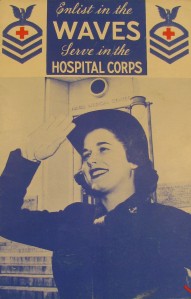 The larger story of war, of course, is all about the minutiae. The battles and explosions are few and far between when compared with the everyday: the people who work behind the scenes to make sure the troops on the front lines have what they need, the waiting and training in between the fights, the political machinations as each side jockeys for position. One women we spoke with described her military group as something closer to the to sarcastic cut-ups of M*A*S*H than the heroic portrayal by Tom Brokaw of The Greatest Generation. Others talk about the waiting, the boredom, the crushing dullness of the day-in-day-out sameness as their wartime experience. They challenge our notion of what heroism is. And, yes, their experiences, even the minutiae, can change the course of the world.

So why is there such a resistance to tell that story?