So we’re chugging along on the film and various ancillary projects and this discussion came up with our Production Assistant today (Laura, who’s temporarily stepped aside from the wonderful work she’s been doing on the blog to work on the Homefront Heroines TagWhat project): when does something move into the public domain?

We’re considering works originally published during World War II, films and newsreels for the most part. According to copyright law, the works might be in the public domain. Then again, they might not. It all depends upon if the copyright was renewed or not. If it wasn’t, the work is in the public domain. If not, a film produced in 1944 would remain copyright protected until 2039.

We understand (and fully support) copyright protections. It keeps the creator of the work in control of how the work is distributed.  That’s a good thing. However, where it gets muddy is when a corporation uses film produced by a public entity, such as the U.S. government, and then masks its production of the film in copyright. We’re running into that issue with newsreels right now. Much of the footage is government produced – yet the copyright in some cases is held by a film studio. Or, a film produced by a studio has fallen out of copyright, but the production company who repackages the material claims they have “copyright” on the production. Not exactly. On the DVD packaging, yes. On the film itself, not so much.

Muddy areas. Frustrating areas. And all of it is complicated by the web and the publishing that occurs therein.

That being said, this photo is produced by the U.S. Navy. We’re sharing it with you because it is “owned,” as it were, by the U.S. public. 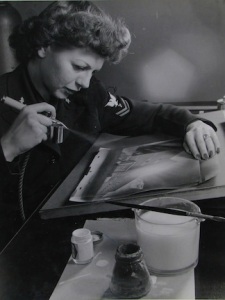