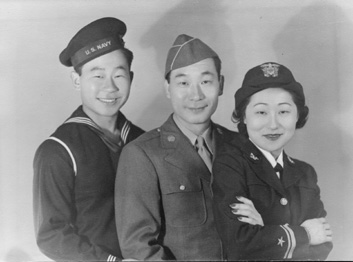 I was Korean blood.  We were fighting the Japanese. I was American. I was very American, raised to love and honor America. There was actually no choice. I mean that was it. Why other women didn’t do it, I don’t know.

This is a photograph of Ahn and her brothers in uniform. It comes from the collection of Susan Ahn Cuddy and the Island Mountain Trading Co.