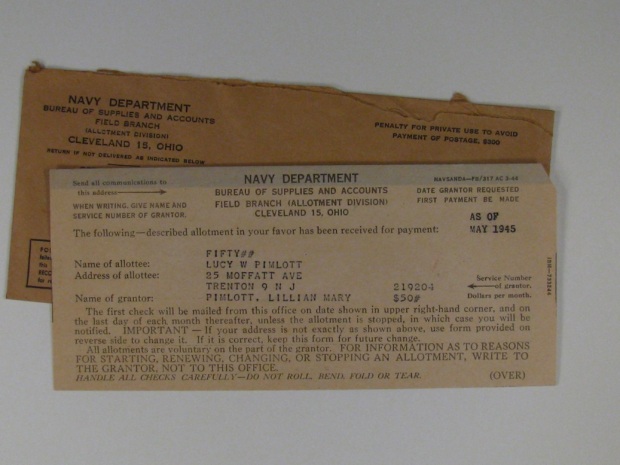 This is a really fascinating document found in the Betty H. Carter Women Veterans Historical Project at the University of North Carolina Greensboro. It is a receipt for extra pay ($50) disbursed to Lucy W. Pimlott, on behalf of WAVES Lillian Pimlott. WAVES received the same pay as men, and like men often received extra money to pay for uniforms and uniform updates. It’s likely this is for a uniform or other supplement, as the $50 amount is much lower than all but one of the Navy pay rates (only an Apprentice Seaman, the lowest rank in the Navy,  made $50 a month).

At this time of this disbursement, WAVE Lillian Pimlott was stationed in Hawaii working in the District Personnel office. She had been in the WAVES since 1943 and would later become a part of the post-World War II Navy.

This disbursement was likely a portion of Pimlott’s monthly base pay, sent home to help support her family.