One last post to end our series on the film Here Come the WAVES.

We’ll leave you with a quote from the film, an exchange between Rosemary and Susan, twin sisters both played by actress Betty Hutton.

Susan: Only I wish… I wish…

Roemary: I wish that I had been born twelve minutes earlier than you, and I’d have had all the brains.

And if you have some time this Sunday, check out the full film, below.

Here Come the WAVES was nominated for one Oscar, for best music original song Accentuate the Positive. The song was written by Harold Arlen and Johnny Mercer.

It didn’t win. It Might as Well be Spring from the Rogers and Hammerstein musical State Fair took the award that year.

Here’s a version of the song (not from the film), sung by Bing Crosby and the Andrew Sisters. 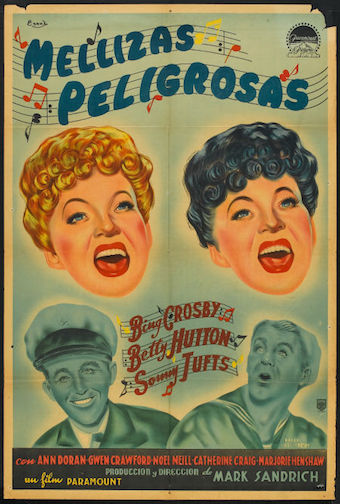 The poster above is from the Argentinian version of the film, known as Mellizas Peligrosas, or Dangerous Twins. The poster below from the Denmark release, which translates as A Real Sailor. 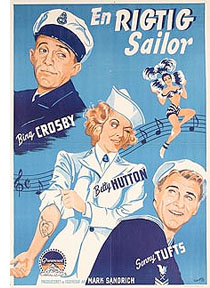 The theatrical poster for the film Here Come the WAVES, filmed in cooperation with the US Navy and released in December 1944.

And look what we found on the other side of the December, 1944 WAVES Newsletter. An ad for the new film Here Come the WAVES.

The Betty Hutton/Bing Crosby vehicle was filmed on Navy bases and at the Hunter College Boot Camp. It went into pre-release at Navy facilities across the United States before going into theatrical release December 18, 1944.

This year, we decided to have our annual holiday greeting tied to the “Hollywood Holidays” theme we’ve been working on the last couple of weeks. The reason? This is the 70th anniversary of the release of Bing Crosby’s hit White Christmas. The song topped the charts in the weeks leading up to Christmas in 1942, and would go on (according to the Guinness Book of World Records) to be the biggest selling song of all time.

The song was first performed in a radio show in 1941, and was a part of the movie Holiday Inn, which was released in July of 1942.

WAVE Helen Gilbert remembered being in training camp as the holidays approached in 1942:

The first Christmas in Wisconsin, it was very sad. We were all homesick.  We were just a bunch of young girls who wanted to go home. I remember Bing Crosby’s White Christmas.  Every time it went on we were just sobbing.  It was crazy, but we lived through it and finally graduated.

May your days be merry and bright and all your Christmases be white.